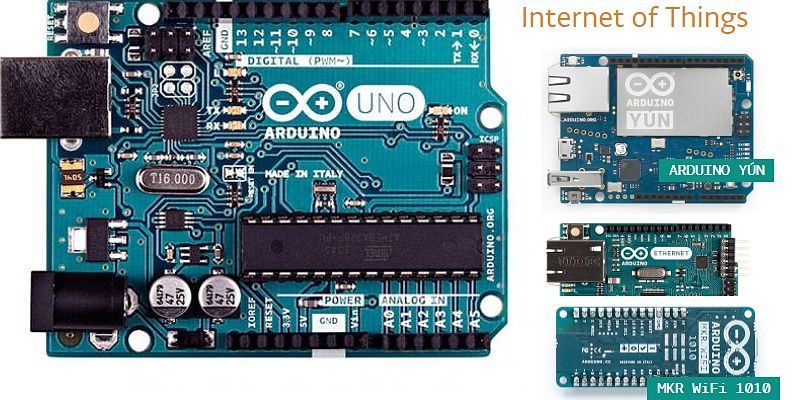 Arduino circuit boards are very popular for building custom IoT hardware. They run on a single-board micro-controller and are often competing with Raspberry Pi as end applications for IoT projects.

Arduino offers an inexpensive, extensible and highly versatile platform for developers to start tinkering with out of the box.

Arduino is a completely open-source electronics platform that was developed in Ivrea, Italy, in 2003. As an aside, the name Arduino comes from a bar where the developers often met to discuss their projects.

There are different components present in any Arduino project: boards, modules and shields. Using an easy-to-use Arduino software, one can write code on Java, C or Python and upload it to the boards, modules or shields.

In addition, there are many different versions of Arduino boards that are popular. Of these, Arduino Uno is extremely common and one of the best boards for entry-level projects.

Components of an Arduino Board

A typical Arduino board, such as Uno, consists of different components, as shown below.

Applications of Arduino in IoT

Many of these projects are available at Arduino Project Hub. From automatic garage parking to baby monitors, metal detectors and industrial robotic hands, one can learn creative IoT designs.

If you want to replicate one of these interesting projects, you can order an Arduino kit online. Arduino’s open source community is extremely helpful and supportive to those wanting to build something of their own.

As the IoT space evolves with more interesting projects, circuit boards of Arduino or Raspberry Pi will gain huge importance. Currently, there is hardly any IoT project where these don’t find end applications. A lot of future articles on this site will feature projects or information relating to Arduino.