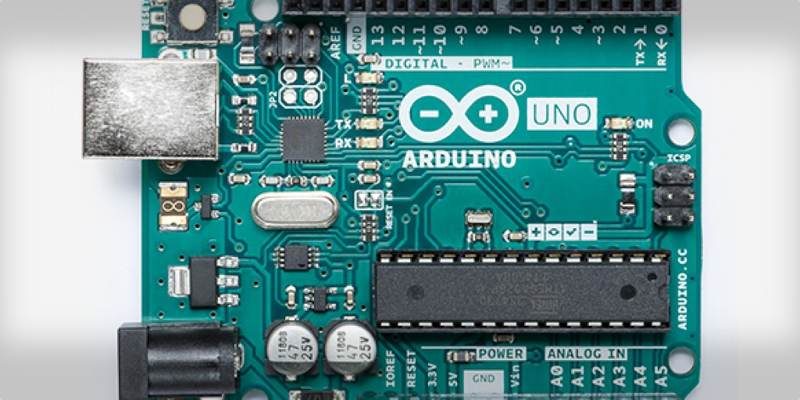 No matter which model you pick, the Arduino is a great starting point for your Internet of Things projects. On its own though, an Arduino is fairly limited. Out of the gate, it lacks several things you’ll need for more advanced IoT builds. These include advanced networking, various sensors and more.

Fortunately, Arduino models are extensible with additional hardware known as Shields. These add all sorts of functionality to your Arduino, letting it rival or even exceed what you can do with a Raspberry Pi.

Related: What Are Arduino Shields? An Introduction to Arduino’s Greatest Trick

If you want to push more power through your Arduino device, then you’d do well to get a relay shield which will increase the current and voltage limits on the device.

There are four relay points on the Arduino 4 Relays Shield, with each having two changeover contacts. The NO/NC interfaces let you control the load, and it features some handy LEDs which let you know the on/off status of each relay point.

There are multiple reasons you may want to control motors with your Arduino build. This can include anything from an automatic pet feeder to a full-fledged robot. No matter why you’re looking to control a motor, the Arduino Motor Shield will help your build do it.

Specifically, this Shield is designed to drive solenoids, DC motors, and stepping motors. The Shield can control two separate motors, letting you control the speed and direction of each one independently. Even better, the Shield is TinkerKit compatible, so you can easily add TinkerKit modules to it.

With many things you power with a motor, you’ll want to monitor how they are moving. For example, a self-driving robot is going to want to know whether it’s moving or not. That’s whether the Arduino 9 Axis Motion Shield can come in handy.

This Shield includes a 14-bit accelerometer, a triaxial 16-bit gyroscope, and a triaxial geomagnetic sensor. What this means is that it can measure acceleration, orientation, and magnetic field. Whether you’re looking to build a DIY robotic vacuum or get some metrics from your model rocket, this Shield can help.

What if you want to be able to build and control a robot? How about creating a DIY remote control car or a drivable vacuum. You’re going to need a way to control it, which is why you need the Joystick Shield Kit.

This Shield attaches to an Arduino and turns it into a simple controller. You get five momentary push buttons and a two-axis joystick. It’s no PlayStation 4 or Xbox One controller, but it will give your Arduino functionality on the level of the original Nintendo controller.

If you don’t want to spend money on a smart thermostat and instead want to build your own, you’ll need a way to measure temperature. The Arduino MKR THERM Shield will not only do this but will do it very accurately.

This lets your MKR board acquire temperatures from a type K thermocouple and a DS18Bxx digital one wire sensor. This type of sensor is known for being very accurate and capable of reading a wide range of temperatures. With this Shield, you can build anything from a digital thermometer to a full-blown weather control station.

Sometimes you might be looking to add functionality that isn’t easily available as a Shield. This can be especially true for IoT-specific sensors. If you want to add sensors, the Arduino MKR Connector CARRIER will let you do this.

This Shield lets you add components using the Seeed Studio Grove form factor. These include moisture sensors, air quality sensors, sound sensors and much more. If you’re looking to add components with Grove connectors to your Arduino build, this is how to do it.

This is just a small sample of some of the various Shields available for Arduino hardware. We aimed to include Shields available via the official Arduino story, but there are tons of third-party options as well. Other available Shields include touchpads, LCD screens, and even smoke detectors.

If you’re not sure what Shields you might want to add to your Arduino, looking at some sample projects might help. For some inspiration, take a look at our list of the best Arduino IoT projects.