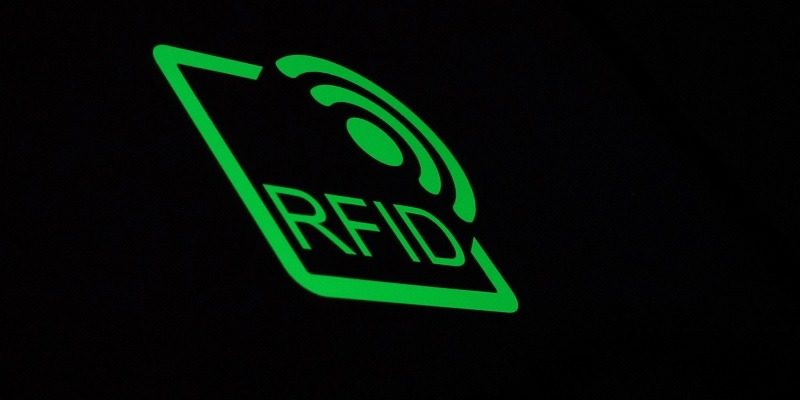 Radio-Frequency Identification (RFID) is a technology common in manufacturing to identify, record and control moving objects.

They are useful in identifying objects and even people. For example, you can find an RFID chip in the latest biometric passports.

RFID finds natural application in Industrial Internet of Things (IIoT) to track objects in bulk such as boxes or pallets. As we will discuss, though, the role of RFID in IoT is far more descriptive than that of industrial goods.

What Is RFID and How Does It Work?

The technology behind RFID has been present for at least five decades. It uses radio waves and electromagnetic fields to transmit data for identifying the objects. Basically, an RFID system consists of three components:

1. RFID Tags: We have all seen RFID tags in product barcodes at the supermarket. However, these only refer to “passive” RFID tags which are very easy to activate, as they do not have their own power supply.

In contrast, “active” RFID tags may consist of a microchip or antenna and on-board sensors. For example, a store-bought package of fresh fish can be given temperature sensors in RFID tags to determine when the perishable product goes past its expiry date.

2. RFID Reader: An RFID reader is a machine that uses radio waves to identify an RFID tag and transfer its status to an RFID software or application. The reader may be hand-held, USB-driven or even work with Bluetooth.

Note: Contrary to what some may think, a barcode scanner is not an RFID reader unless it has an RFID module. However, RFID readers can most definitely read barcodes.

3. RFID Application/Software: To control and monitor the RFID tags, there is usually a software or even a mobile app. They can use Bluetooth or Beacon technology to communicate with the RFID reader.

Here is a simple schematic diagram of an RFID system along with a mobile app. It shows various simple applications including hospital beds, airplanes, food, automobiles and more connected via RFID tags.

Applications of RFID in IoT Devices

In IoT, RFID is used along with cameras, GPS and intelligent sensors to locate and identify objects.

Smart Homes: RFID is a low-cost means to make “dumb” objects in the home smarter. It doesn’t consume time or money to implement an RFID chip on casual objects. Do you have a smart shirt? With a smart washing machine that can read RFID labels, you can control its wash cycle and drying.

One of the commercial applications of RFID is Nest Tag, a $25 keychain which can activate Google’s Nest Alarm system.

Healthcare: Patients that require intensive care in hospitals are now being given RFID implants. Their health data is automatically recorded and updated in EHR systems. However, there are concerns about the invasion of body privacy.

Intelligent Transportation: Smart fleets in various cities around the world use RFID tags to keep traffic under control. RFID tags can read passenger data as well as keep the transport systems alert to system updates.

Ant Farms and Bee Farms: Did you ever have a hobby of maintaining “glow in the dark” ant farms? Maybe a bee hive? There is an increasing trend to miniaturize RFID tags, and bumblebees have been used as miniature drones.

RFID tags have some concerns in actual applications. For example, they are prone to interference in signals which causes collisions in the objects. Moreover, RFID networks are currently vulnerable to IoT security issues, as there have been several instances of DDoS attacks and eavesdropping.

Having said that, the low cost and device coverage of RFID systems makes them a good value proposition for both consumer and industrial IoT.