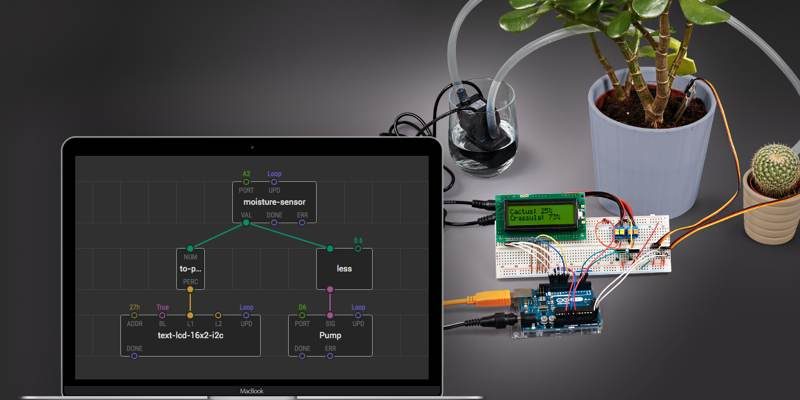 Plenty of people want to build a cool IoT project but may be intimidated by coding. You can’t learn to program overnight, and if you’re busy with other hobbies, you may not have the time. If you’re interested in Internet of things projects, this could be disheartening.

Fortunately, there are tools that let you build these types of projects without traditional programming. You can still build the projects you want to build, complete with logic – you just don’t need to slave away writing the actual code. It’s all thanks to a tool known as XOD.

XOD is a visual programming language for microcontrollers, like the Arduino Uno. Instead of writing code, you drag and drop various blocks of logic known as nodes. Linking these together, you can create programs.

You might expect that this tool would be expensive, but it’s entirely free. Not only is it free of charge, but XOD is actually an open-source project hosted on GitHub. While XOD is backed by XOT Inc., that company plans to make money by offering cloud services, not by using XOD as a product.

While it’s simple to get started with XOD, it can scale up quite well. This means you can build bigger and better things as you continue to learn the platform. XOD creates code meant to run directly on target boards, so there’s no need for a controlling a PC or other sort of bridge.

You can download and run the XOD IDE on Windows, macOS, and Linux. There is also a “lite” browser version of the IDE, so you don’t even need to install it if you don’t want to. The browser version is especially handy if you’re exploring whether or not you think XOD is for you.

When it comes to hardware you can run code from XOD on, the Arduino, ESP8266, and compatible boards are supported. Several other pieces of hardware, including sensors, buttons, motors, and displays, are supported, too. To see if your hardware is supported, see the supported hardware list on the XOD website.

Launching the XOD IDE for the first time, you may not be sure what to do. Fortunately, you’ll find several example projects included. There are projects that introduce you to XOD as a platform, but that’s not where it stops.

The XOD example projects don’t just teach you the platform – they also include tutorials for wiring hardware to work with the code. This makes it a great option if you’re new to Arduino or similar boards and want to start with your own IoT projects.

You’ll find plenty of learning material in the example projects. Once you’ve exhausted these, there’s plenty more to learn from XOD’s extremely active community. You’ll find plenty of exciting projects made by other users that can serve as a great starting point for your own.

Where to Go from Here

What you’ll be able to build from the start depends on a few factors, like how skilled with hardware you are and how well you take to learning XOD’s approach to logic. No matter where you start, you’ll be able to make more impressive projects as you familiarize yourself with XOD.

If you’re not sure what to do for your choice of hardware, the Arduino Uno is a good choice. Would you prefer a few options? Take a look at our list of the best hardware for IoT projects. Not every board is compatible with XOD, but it will give you a basic idea of your options.