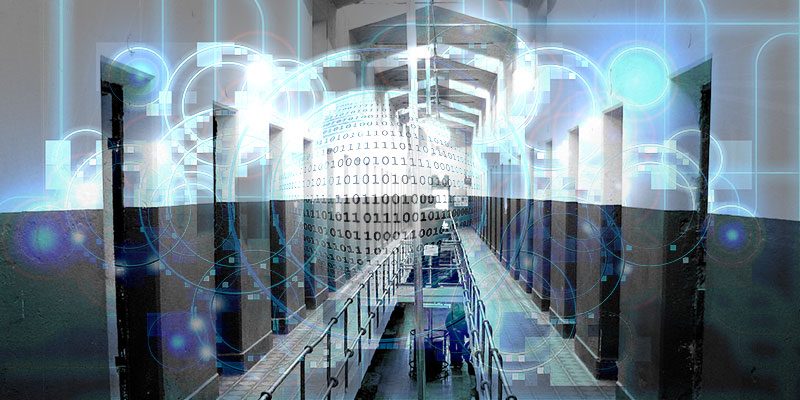 Let’s face it: a world full of IoT could be a very creepy place. Imagine a reality where sensors and devices can be used to monitor people around the clock: tracking their movements, biometric data, even their conversations and eating habits.

If someone is going where they aren’t supposed to, you can stop them. If you suspect someone of criminal activity, you can look at how often they associate with known criminals. You can even predict their next health issue and prevent it – or not prevent it, perhaps.

In most countries a governmental or corporate entity doing this sort of thing to the general public would raise a huge outcry, but everything listed above (except maybe letting them die of preventable diseases) is currently being done to prisoners in corrections systems across the world (notably, China), and nobody’s really raising a fuss.

Moral arguments aside (not that they don’t matter, but we’re mostly focusing on the tech here), what kind of technology is being incubated in our prisons, and how might the Internet of Prisons affect the broader IoT ecosystem?

One of the most obvious uses for IoT in prisons is monitoring inmate movements. The tracking devices might be wristbands, face recognition cameras, biometric trackers, ID badges, trackers sewn into uniforms, or, in a more dystopian vision of the future, an injectable microchip.

It doesn’t really matter as long as every inmate’s movement is being constantly fed to security guards and AI systems that can raise alerts when trouble is afoot, like when an inmate is headed towards the wall (which probably has laser sensors anyway).

Not only can this prevent escapes, but it can be used to keep order in dozens of other ways that might not be immediately obvious. The system could raise an alert if rival gang members get too close to each other or might even be able to detect when a prisoner has joined a gang depending on his pattern of activity.

It could identify social networks in the prison and use them to create optimal cell layouts, track contraband smugglers, and flag unusual activity that might hint at an impending issue. Some prisons in China are even installing AI-connected cameras in cells to observe prisoner behavior and raise flags depending on their behavior.

And this is only the in-prison application: non-violent criminals and prisoners with good behavior are already being allowed to serve their time outside of prison on the condition that they wear electronic tags – usually ankle monitors – that ensure they don’t run away or leave the area they are confined to. This can be a big help in reducing prison overcrowding and is probably better for both the inmates (outmates?) and society in general.

Inmate safety can definitely be improved by keeping dangerous criminals separate, but it doesn’t end there. A wearable panic button worn by an officer or vulnerable prisoner can summon help if the person is in danger. Wearable health monitors can be used to keep an eye on at-risk inmates’ health conditions, tracking things like temperature and heart rate to ensure they get medical care when they need it. Even suicide can be detected and prevented using a sensor that monitors heartbeat, breathing, and movement to prevent suicide among prisoners deemed at risk.

Better living environments are also essential to health and can help boost prisoner cooperation and reduce behavior issues. Prisons aren’t famous for being healthy – and some would argue that we should keep them that way – but monitoring and adjusting the environment of a prison based on feedback from remote sensors would likely prevent future medical and psychological issues among inmates, which would have a positive impact on the bottom line as well as rehabilitation.

Another positive impact of IoT environmental control on prisons would be more efficient resource use, minimizing power and water usage and managing waste more effectively. As with any other smart building, rooms could automatically control the lights based on human presence, efficiently regulate temperatures, and be remotely controlled from a central location.

That last bit is important, not just for convenience, but for security. Being able to remotely lock or unlock any door in a prison, cut or restore power or water, and generally monitor the status of every connected system would be pretty helpful for prison guards. Especially with the help of an AI, they would be able to quickly see and rectify irregularities in, whether it’s a prisoner’s open door or a drafty room, and would theoretically be much better able to remotely control situations. Even machines and tools could be tagged and monitored, whether just for routine maintenance issues or to detect misuse or theft.

The Internet of Prison Things: Coming to a Home Near You?

All this Internet of Prison stuff actually sounds pretty good, right? Safer, healthier prisons, more humane treatment of everyone involved, saving money – great! But do we need to be worried about sophisticated tracking and behavior-monitoring systems maybe spilling over into non-prison applications? We are, after all, gathering intrusive amounts of data on people who are going to be released from prison and have their full rights restored.

We already needed to worry about that since that “behavior tracking” basically describes the modern internet, but prison technology has a lot of money behind it, and it goes directly to the government, making it relatively ripe for abuse.

Remember back when prison technology companies were essentially letting any random person get the real-time location of any cell phone in America? Yeah, that was pretty recent. There’s currently quite a bit of uncertainty surrounding how law enforcement should be allowed to use AI and other new technologies, but prison technology slips under the radar pretty effectively, meaning it might just be developed there and gradually applied by other branches.

The technology will eventually develop regardless, but no matter where it’s happening, we should always keep a careful eye on new developments in surveillance.