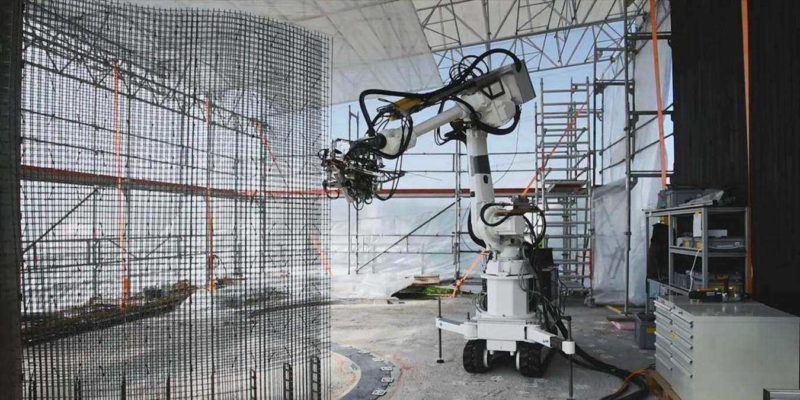 Researchers at a Swiss university have created a house entirely through digital methods. It was used to design the house and plan its construction. Robotics were used to assemble it. Although the experiment was a useful demonstration of increased productivity through automation, its main aim was to discover a way to reduce the carbon footprint of the construction industry.

This recently-completed project was carried out at the Swiss Institute of Technology, which is a university better known as ETH Zurich.

Related: What Is Internet of Robotic Things and How Does It Affect You

The design and construction of the house had the project title of the DFAB House. “DFAB” stands for “Digital FABrication.” The university department engages in a range of projects that explore the creation of objects. Major breakthroughs of the department have included the production of tough fabric that is used as forms in concrete-pouring to produce concrete shapes. All of the DFAB innovations were implemented in the construction of the DFAB house, which created a multi-disciplined approach to construction.

The DFAB house has an irregular design. However, it is doubtful that the chosen plan was implemented for ease of construction. The bizarre-looking house had to meet the ultimate goal of being a nice place to live, and now that it’s completed, its ability to function as a home is being tested by a group of students who are residents there.

The UN Environment Global Status Report of 2017 identified that buildings and construction account for 36 percent of global final energy and use 39 percent of energy-related carbon emissions. That figure lumps together both consumption for maintaining, heating, and ventilating buildings and the energy expended in constructing them.

There have been many advances in creating carbon-neutral HVAC and maintenance systems in the past decade. However, no one has managed to address the large amounts of energy consumed in producing construction materials and assembling them into a finished building. ETH Zurich decided to address these overlooked energy-consuming activities.

Solutions to energy consumption in buildings were found in forming structures on-site rather than relying on pre-fabrication. This flies in the face of standard construction conventions where usually offsite work is preferred to money-guzzling onsite activities.

The employment of construction skills is a major cost for building development, so the introduction of a high degree of automation in assembly took the cost pressure off project managers and made onsite fabrication more feasible.

A major cost and energy saver was the innovative approach used for fabricating concrete structures. Rather than pouring the concrete, the researchers settled on 3D printing. This innovation enabled the creation of lightweight, latticed plinths, which made a major contribution toward the project’s achievement of reducing the concrete used to build the house by 60 percent.

It is the innovations in methods to reduce carbon emissions that makes the DFAB project a world’s first. This certainly isn’t the first building ever constructed with robots. Japanese builders, faced with a decreasing population, pioneered the deployment of robotics and applied them to construction.

The Japanese approach, however, was inspired by the successful deployment of robotics in automotive manufacturing. Consequently, their construction automation relied on a greater degree of prefabrication, which was conducted indoors and offsite by robots.

The concept of automated component production reduced onsite construction time and so appeared to speed up building times. The reduction of the need for onsite staff also cut costs. However, the approach merely shifted the location of the work to erect a building.

Since 2016, researchers in Japan, in partnership with the country’s major construction companies, have been developing construction platforms that combine a series of specialist robots into a construction team. These are now expected to be deployed in the field to implement onsite robotic construction.

The Future of Construction

The Japanese have always had a more positive attitude towards robots than Westerners. In Europe and North America, robots are seen as a threat to jobs and are overwhelmingly depicted in the media as potentially uncontrollable killers.