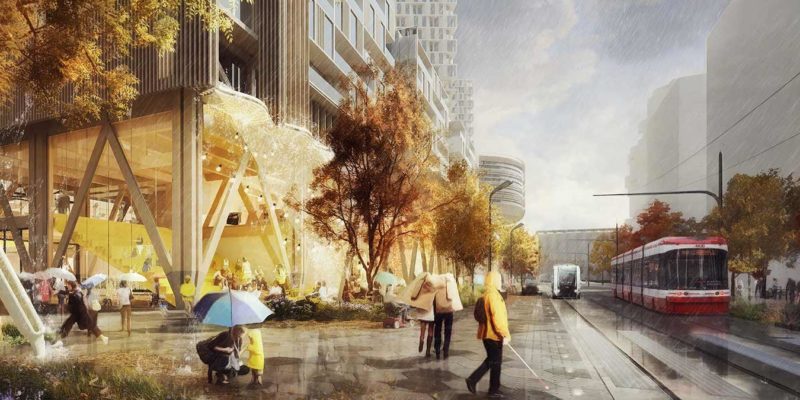 Depending on who you listen to, Alphabet’s Sidewalk Labs venture is either creating the blueprint for the city of tomorrow or building an inescapable surveillance network. Either way, however, Sidewalk Labs has some unquestionably interesting ideas about how to start designing the cities of the future.

Their first real-world experiment in Toronto, Canada, has a lot of what you’d expect – self-driving cars, sensor networks, artificial intelligence, underground robotic delivery networks, etc., but a lot of the innovation is less about technology and more about urban design principles. The housing is being designed to be affordable, the streets are designed to be walkable and dynamic, and everything is modular to make changes as seamless and easy as possible.

Related: What Is a Smart City?

Metal and concrete? Not in Alphabet’s smart city. Sidewalk Labs is planning to construct its buildings out of materials like mass timber (a strong, fire-resistant wood) and Shikkui plaster (a natural drywall substitute). This will give the buildings both a greener feel and a greener footprint.

In Quayside (the part of Toronto that Sidewalk Labs is building in), around twelve buildings will be constructed from this material, many of them stretching vertically into skyscraper territory. The housing units (about 40 percent of which will be affordable or below-market-rate housing), will be constructed with modular designs and prefabricated materials that allow a single space to quickly transition between residential, office space, and commercial uses.

These mixed-use plans are important for Sidewalk Labs, which sees their future community as a place where life, work, and play can all take place in a roughly 15-minute radius.

One especially Canadian touch is the “raincoat for buildings” that can be put up in the wintertime to help shield people from the elements and create year-round outdoor spaces.

One of the top priorities for Sidewalk Labs is bringing walkability to traditionally car-centric North American cities. They’re optimizing its streets and sidewalks for pedestrians and cyclists and pushing heavy traffic, including shipping, package delivery, and waste management, underground.

Mobility solutions like scooters and car-sharing will be emphasized over private car trips, which take up a lot of space on city streets and cause congestion. Bike lanes and street crossings will be heated to keep snow and ice from making them unusable, the curbs will shift in response to traffic loads, and, of course, self-driving vehicles will make an appearance at some point, perhaps starting off as shuttles with fixed routes.

Bike lanes and street crossings will be heated to keep snow and ice from piling up in them, the curbs will shift to help provide passenger loading zones in peak times, and a logistics hub will make deliveries underground, perhaps robotically.

Much like the buildings, the streets will be modular, built of hexagonal tiles that allow quick changes and repairs. Multi-use parks, public markets, and easily-repurposed lower floors will help public spaces adapt to changing seasons, trends, and events, giving Quayside a perpetually “on” vibe.

The digital realm and data concerns

Of course, Alphabet is primarily a technology company, not an urban-planning think tank. As such, their vision of a smart city also includes a layer of physical sensors and interfaces connected to city services and databases, tracking everything from energy consumption to how people use public spaces.

Climate control will be optimized by AI, stormwater will be automatically managed and routed using a sensor network, building maintenance and living standards will be tracked, communities will be able to make decisions based on collected data, and it’ll all be wired together with a high-speed Internet network accessible from anywhere in Quayside.

Exactly what kind of tech will be on the streets and in homes isn’t 100 percent clear yet, as Sidewalk Labs is strenuously distancing itself from the accusation that it’s “building technology for technology’s sake.” Toronto’s waterfront is intended to be a lab to help measure and design future smart cities, though, and that’s going to require a lot of data collection and analysis.

Predictably, a lot of people are uncomfortable with the idea of a private company gathering data on our public lives, which is why Sidewalk Labs is focusing a lot of attention on things like de-identifying data and ensuring it’s properly stored and used. Their plan calls for the establishment of an “Urban Data Trust” where macro-level, anonymized data can be stored separately. No commercial usage of the data will be allowed (including by Google), and only projects that follow security and privacy guidelines will be allowed to access it.

The criticism remains, though, that there’s no way to opt out of this system once you physically enter it, and the debate is likely to continue well beyond the project’s completion.

Alphabet and Sidewalk Labs are very aware that their smart city project invites a lot of scrutiny about their tech and data practices, and, given that this is going to set a lot of precedents for future smart cities, that’s probably a good thing.

Second, Quayside is acting as a focal point for a lot of debates that might not otherwise have happened, or at least wouldn’t have had much effect. Despite the people-first principle, Sidewalk Labs is undoubtedly going to cover a lot of the city in tech and gather data on every centimeter, and having to deal with that reality is forcing us to have conversations about how to handle it. Hashing out these issues now, on a small (but very public) scale, will probably set positive precedents for the future.