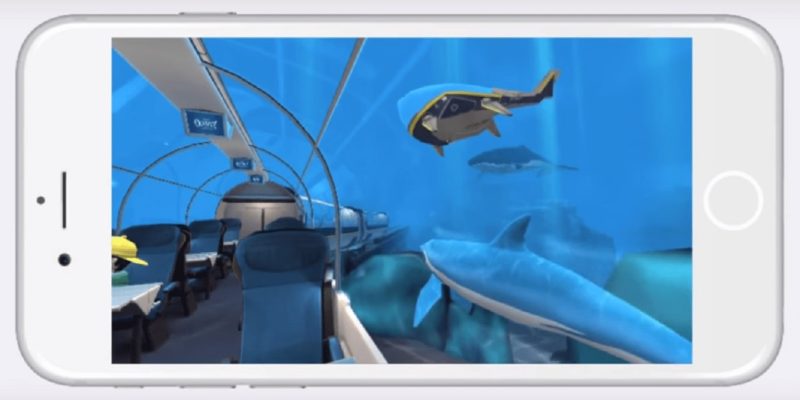 When you travel on the Eurostar between the UK and the continent, you can entertain yourself by watching the scenery go by. However, on the stretch when you are in the Channel Tunnel, there is nothing to see.

Eurostar has created a facility to keep the kids entertained during that dark and boring underground stretch, and it’s a great experience for adults as well. This is a virtual reality app that makes it seem as though the train you are on is a Perspex tube through a tropical sea. This app is called Eurostar Odyssey.

In reality, the Channel Tunnel was bored through the bedrock beneath the sea bed of the English Channel, it does not pass through water. If, in reality, the train was a clear tube, the surrounding waters would be murky and dark and not the bright blue haven that you see on the viewer. However, this is all about entertainment, not real life.

How to Set Up Eurostar Odyssey

You don’t need to wait until you are in the tunnel to get the app on your phone. However, you can’t access it from anywhere in the world – you have to be on the Eurostar train in order to get Odyssey. The system works on any mobile operating system, and you can access it on phones and tablets. Once you have found your seat, follow these steps to access the Odyssey system.

1. Go to the Wi-Fi options on your phone or tablet and connect to “EurostarTrainsWifi,”

2. Go to the app store for your operating system and download the Eurostar app.

3. Open the app, tap on the hamburger menu at the top-left of the screen, and select “Entertainment and Wi-Fi” from the menu. The Odyssey app features as a headline at the top of the Entertainment screen.

4. Tap on the Odyssey headline to get access. In the main Odyssey setup screen select “Start with just your phone or tablet.”

5. Specify your seat position. You don’t need to give your seat number, just whether you are facing forward or backward and on the left or the right. The system doesn’t ask you whether you are in an aisle or window seat. Tap on “Start Your Odyssey” to begin.

6. Optionally, connect your headphones to your device. You don’t have to do that, as the display will begin even if you don’t.

How to Use Eurostar Odyssey

The Odyssey virtual reality viewer is very easy to use. It acts like a keyhole through to another world. Hold up your device and move it around. You will still see the real world all around you, but your device’s screen will show you a view that looks like you are in an aquarium. The view moves and adapts as you move your phone around.

For an enhanced experience, you can buy a stereoscope viewer kit from a booth in the Eurostar terminal while you are waiting to board. This kit comes with instructions on how to assemble the cardboard viewer.

Access the Odyssey system through the Eurostar app in exactly the same way as you watch on your phone. However, in Step 4, explained above, select “Start with a virtual reality headset.” After you have plugged your earphones in, the phone slots into a space at the front of the viewer. This slot is only big enough for a smartphone– it won’t take a tablet.

The Odyssey app is just one example of how virtual reality can enhance the experience of tourists. This type of phone-based app will become increasingly popular as phones gain greater processing power. It will become particularly useful as an outreach tool for museums and historical sites. For example, imagine visiting the Coliseum in Rome and being able to see through your phone how the arena looked when it was first built and hosting a tournament.

The advent of 5G should also aid in the delivery of live-streaming VR entertainment experiences by which game participation will be transformed. Live events, such as concerts and premium boxing matches, will be able to sell more pay-per-view tickets by offering a virtual seat through a phone app to all distant participants.

Mobile-based VR viewers will have applications in education, engineering, science, and design. Experiencing the Eurostar Odyssey doesn’t just give you an underwater view of the sea – it gives you a view of the future.