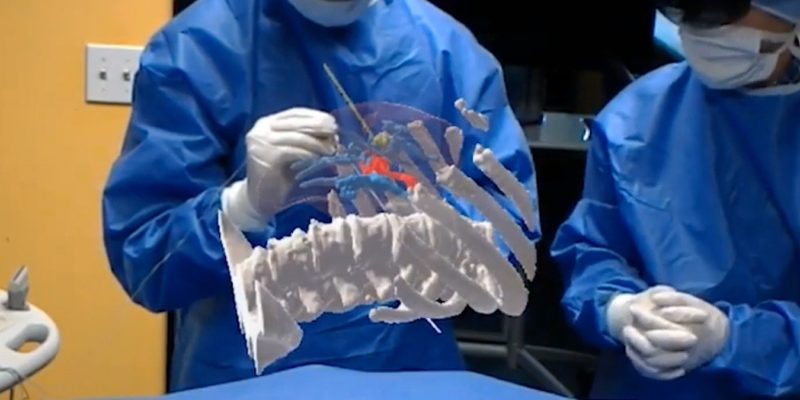 Augmented reality can be used for more than just Pokémon Go. It’s being used in retail and design as well and is also making a foray into the medical world.

A research institute wants to make surgery via augmented reality possible to where surgeons can get a better idea of what they’re doing with AR providing them X-ray vision.

MediView XR, a new startup from the Cleveland Clinic’s Lerner Research Institute, is being developed to grant X-ray vision to surgeons while they’re operating on patients.

Using AR goggles that are similar to Microsoft HoloLens, the MediView XR technology allows surgeons to look inside patients to see what they’re operating on. Instead of having to refer back to a patient’s X-ray taken earlier, it’s all right there.

But it’s better than an X-ray, as it’s in 3-D, allowing surgeons to see organs, blood vessels, bones, and even things they are working on removing, such as cancerous tumors.

This system “fuses” the readings from ultrasound devices, such as CT or MRI scans and provides a view to a patient’s anatomy without the exposure to harmful X-rays. Being three-dimensional, it allows surgeons to move around the patient and still see what they’re working on from the changing perspective.

But along with seeing the “insides” of the patient, the MediView XR will also allow surgeons to see their instruments through the AR goggles as they operate. A “lightsaber-like” ray of light will be produced from the end of the instrument and will allow them to see what they’re cutting, helping them see with better accuracy.

While the MediView XR could certainly be used in many diffeferent surgical situations, it’s being developed in particular for use in the removal and biopsy of cancerous tumors.

First place went to Vivid Vision, a new treatment for lazy eye that uses VR to train the weaker eye. Third place went to Augment Therapy, a technology that uses AR to improve the commitment of children to physical therapy through interative exercises that are based in play.

The Future of Surgical AR

It’s hard to believe that augumented reality isn’t already being utilized all the time in surgery. It can be used for so much more than just gaming. If I was going under the knife soon, whether or not to deal with a cancerous tumor, I’d want the surgeon to have tools like this for better accuracy.

Would you make the same choice? Would you choose to have a surgeon have the benfit of something similar to MediView XR, or would you rather keep the high-tech tools out of it? Share with us in a comment below how you feel about this.