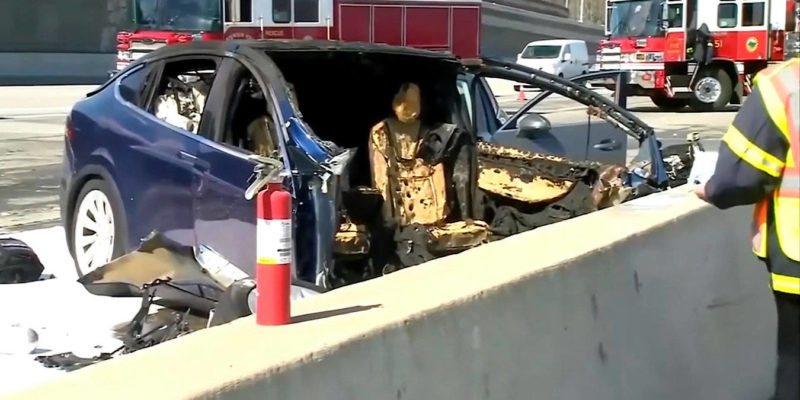 We are repeatedly warned that at this point autopilot features in cars still need human drivers. If you have this feature on your car, it does not mean you don’t have to pay attention while the car is driving. Yet, sadly, not everyone heeds that warning.

Two years ago an Apple engineer was killed in a Tesla crash when he was driving the car in Autopilot mode. The National Transportation Safety Board finally completed its investigation, blaming Tesla, Apple, and also the driver, determining that he was playing a video game on his phone at the time of the crash.

In March 2018, Walter Huang, 38, an Apple engineer, crashed his Tesla Model X into a safety barrier while driving in Mountain View, California. The NTSB began a two-year investigation into the crash, releasing the findings this week in a hearing.

NTSB Chairman Robert Sumwalt stated that partially automated systems, such as one in the car Huang was driving, are not true self-driving car systems. “If you own a car with partial automation, you do not own a self-driving car,” he said. “Don’t pretend that you do.”

He added that the NTSB has recommended six automakers retire the practice of partial automation in cars. Tesla is the only automaker that has not responded.

The NTSB investigation determined that Huang was playing a game on his smartphone at the time of the crash when his car rammed into the concrete barrier.

“What struck me most about the circumstances of this crash was the lack of system safeguards to prevent foreseeable misuses of technology,” admonished Sumwalt.

He continued, warning, ” … when driving in the supposed ‘self-driving mode, you can’t sleep, you can’t read a book, you can’t watch a movie or TV show, you can’t text, and you can’t play video games.”

He also reprimanded the U.S. Department of Transportation for not regulating autonomous vehicles and Apple for not having policy that would inform employees to not use devices behind the wheel.

Yet, Huang’s family is still proceeding with its lawsuit against Tesla and the State of California. “Mr. Huang was using Autopilot where Tesla told its customers it was safe to use,” said Mark Fong, the family’s attorney. “The Autopilot in Mr. Huang’s Tesla failed to perform according to its claimed capabilities.”

Huang had complained about the Autopilot feature before his accident, yet the Tesla engineers weren’t able to duplicate his issue and didn’t fix it. His family is also suing California for not maintaining a highway safety feature that may have made the crash less severe.

There’s no doubt the Huang family is hurting. However, at some point you have to question why Huang was ignoring the Autopilot feature and playing a video game when he had already complained about it and knew it wasn’t fixed.

He was an engineer. For Apple. He should have known enough about technology to know you don’t play a video game when driving a car with Autopilot. Is this really partially Apple’s fault, as the NTSB claims, for not informing him to not use devices while he drives?

If you were the judge of one of the family’s lawsuits, where would you assign blame for the Tesla Autopilot crash? Tesla, Apple, Huang, or the State of California? Let us know what you think in the comments below.