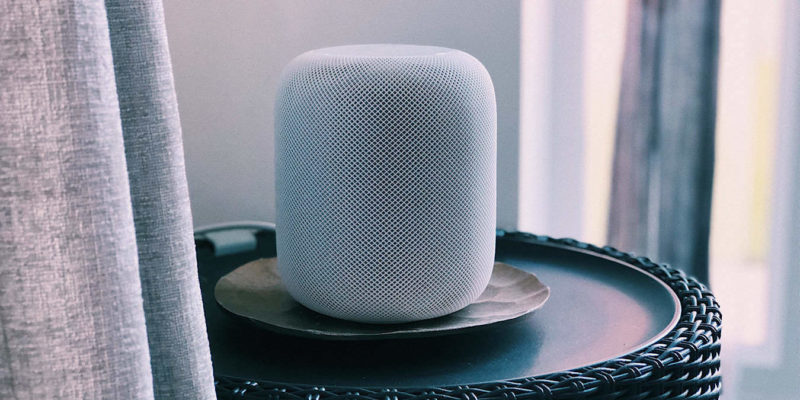 The Apple HomePod has taken much flak in the smart home industry. While there’s no doubt it’s an incredible speaker, there are many who just don’t feel it’s as smart as the Amazon Echo series. That could be changing if you pay attention to a HomePod patent that shows it would be able to identify users, their devices, and also monitor health, similar to an Apple Watch.

Apple’s new patent application shows how devices could utilize radar to locate nearby users or their devices. Using voice, the devices could adjust settings to a user’s preferences. Specifically, the HomePod could distinguish which user is making a request and then supply the matching Apple Music subscription.

The patent, “Electronic Device with Co-Located Independent Radar Transceivers,” shows how many different devices – including iPhones, iPads, Macs, and IoT devices — could utilize the radar to address the problem of Siri not recognizing the correct owner.

The goal, as it often is with Apple, is to have a system that needs little or no advanced knowledge by a user or training for proper operation. The company wants the user interface to adapt on its own “to a user’s preferences and their mental model of a task.”

This means the device needs to be sure which user is making requests. With the solution in this patent, the device gets a radar transmitter and a radar receiver and uses them to figure out what’s in the vicinity and where everything is.

It could be used with devices other than HomePods, such as an iPhone would be able to locate a nearby iPad to send data to it, just as much as it could determine which users are nearby.

“Moreover, the electronic device may identify the invidual based at least in part on the radar measurements,” the patent describes, meaning it could identify a user by their identity or a particular attribute or characteristic.

The device would also be able to detect dimensions of the environment and connect with stored information, which could help adjust audio playback on a HomePod.

Judging how successful the Apple Watch has been with medical needs the past few years, “based at least in part on the radar measurements, the electronic device may determine a vital sign and/or a medical condition of the individual,” the patent continued. Along with vital signs, it would also be able to detect medical conditions, a disease, or physical symptoms.

This would definitely be useful in a HomePod, if not also an iPhone, iPad, etc., and could help tip the scales in its favor. That is, providing that Siri improves to the level of Alexa as well.

Of course, for this HomePod patent to be effective, it will need to utilize Siri multi-user support on HomePods, which just happens to be another patent that was applied for one year ago.

Tell us in a comment below what you think of both HomePod patents.

Bosses Can Use Estimote Wearables to Track Employees
Wearables May Someday Help with Relationships
Could IoT Be Doing More to Help Out in Era of Coronavirus?
Siri Can Help You Diagnose Coronavirus COVID-19
We use cookies to ensure that we give you the best experience on our website. These include cookies for analytics and personalized advertising. If you continue to use this site, we will assume that you are happy with it.OkPrivacy policy