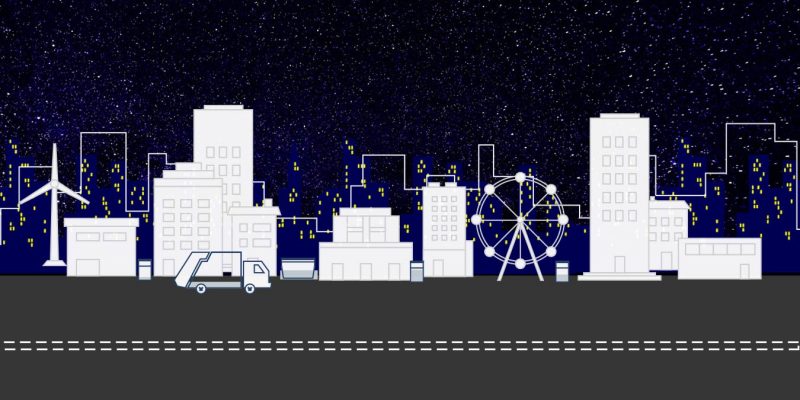 Going even a week or so without trash pickup in a major city can cause so much garbage to pile up that it obstructs walkways and creates public health hazards. Luckily, we have a pretty reliable system: people drive trucks around, pick up the trash, and take it somewhere else for processing. It works fairly well – the majority of the world’s cities aren’t knee-deep in trash – but if you think the system can’t be improved with sensors, gadgets, data, and maybe a few pneumatic tubes, you just haven’t been introduced to the surprisingly large (and already-operational) world of the IoT – Internet of Trash.

What can be improved?

The biggest inefficiency in the current system is that it doesn’t matter if the bin is at 10% or 150% capacity – it’s getting picked up as scheduled. Visiting bins that don’t get a lot of business causes extra pollution and is a waste of time and fuel (and therefore money) which could be spent focusing on more high-volume areas. Overflowing trash bins can also be a public health hazard, attracting rats (a problem Chicago recently dealt with using predictive analytics) and breeding bacteria.

Other issues include things like the need for more recycling, incentivizing people not to litter, and even public safety – garbage cans are a pretty good place to hide explosives, unfortunately. So what’s the plan for optimizing trash pickup, saving the planet, and keeping bombs out of our banana peels?

The dominant idea here is relatively simple: install ultrasonic sensors in the tops of trash cans. These emit a high-pitched sound, wait for it to bounce back, and use the wait time to calculate how far away the trash is from the sensor, which can then help determine how full the trash can is. Multiple sensors can help make sure that the reading is accurate and not just catching one big piece of trash. Some companies are also using weight sensors and cameras (Nordsense makes 3D maps of the garbage, even) to help measure trash levels.

The sensor sends fill level updates to a central monitoring station that can put together data from all the connected trash receptacles and figure out which ones need emptying. This information, along with an optimized route, can then be sent out to garbage collection trucks. Over time, the data will start to show patterns that can help municipal authorities figure out better places to put bins and manage waste.

For a small-scale illustration of how effective this can be, take Dublin Airport’s partnership with South Korea’s Ecube Labs. By installing 300 sensors to monitor waste, they went from emptying 840 containers 4 times a day to emptying just 80 per day, with 90% cost savings. Scaling this up to the level of a city, as several places around the world are currently experimenting with, could have a massive impact. NordSense’s pilot in San Francisco apparently resulted in a 66% decrease in street-cleaning requests and an 80% decrease in overflowing trash cans, for example.

Monitoring fill levels is all well and good, but what if we could also just fit more stuff in the trash can so we don’t have to pick it up as often? Again, Ecube Labs (among other companies) has already been doing this in places like Baltimore. In areas where the compacting smart bins were installed, trash pickup went from twice a day to twice a month, which is a pretty dramatic benefit. Another company, Bigbelly, has been successfully running a similar program in New York (Times Square) and other cities.

Better recycling through AI and micropayments

Getting people to recycle can be tough, so some trash cans are tackling the problem head-on using AI. Cans like Bin-E can automatically recognize waste type, sort it into the correct bin, and compress it. You don’t have to care about the planet (though you should) – the bin will!

And some disposal points will even pay you for your trash, like ecoATMs, which give you money for your old electronics. Taiwan’s i-Trash station does something similar, paying users for the recyclables they bring while also charging them for the conventional trash they deposit.

What if we just build a pneumatic trash subway?

Maybe we’ve been approaching this all wrong. Instead of optimizing truck routes, let’s get rid of them altogether and just shoot our trash to the processing plants under the ground using air pressure. Vacuum-tube waste disposal systems are already in use in several cities around the world, and, having used it personally, it definitely feels like the future. Of course, it’s a much more infrastructure-intensive proposition, so its use will probably be limited to newer or expanding cities.

While we’re setting about making our waste collection points smart, why not go all-out? A lot of models currently on the market don’t just come with sensors to tell you when they’re full; they also include GPS, motion sensors, temperature sensors, and fire detection systems, and they can even be used as Wi-Fi access points. Trash cans, like streetlights, are everywhere, so they may prove to be a surprisingly effective base for city IoT systems.

Remote-controlling these trash cans is also a proposed solution to deal with possible bombings at large public gatherings. You can just close them up to prevent anyone putting a bomb in there, though this does sort of defeat the purpose of a trash can. Maybe the reinforced bomb-proof trash cans are a better way to go here.

The future is trash, and other stuff

Smart waste disposal systems are a great representative of the small ways that the Internet of Things, data, and automation are making our lives incrementally better. As an individual, how often the trash gets picked up probably doesn’t affect your life that much, but if you live in a city that optimizes its routes and suddenly has a few million extra dollars in the budget, you’re going to enjoy the benefits of the amount of money that ends up being reallocated.