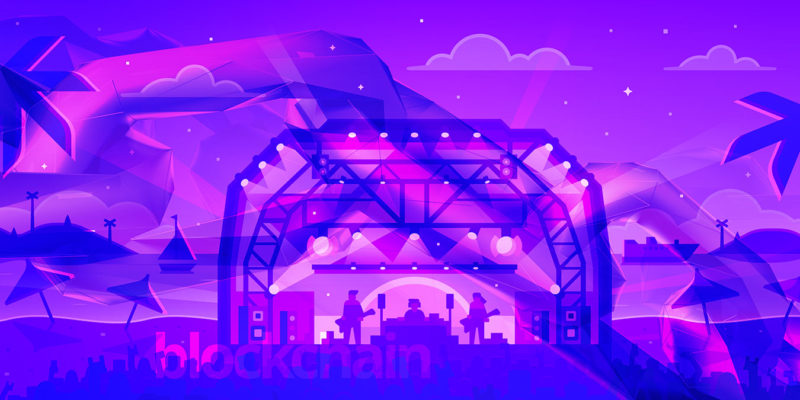 When you listen to a song on Spotify, it pays around $0.006 to $0.0084 USD per song. Assuming that Spotify has accurate information about who owns the song, some of that money will make it to the artist after a few months, once the labels, producers, and other people involved in the creation and distribution of the song get their cut. Figuring out who needs to get paid for a song, paying them fairly, and giving creators control over their work are difficult problems, particularly in the data-heavy world of streaming music (which currently generates over 80 percent of music revenues in the US).

If you know anything about blockchains, you might already know where this is going. Blockchains are very good at keeping track of who owns what and, combined with smart contracts, make complex payment operations fairly simple to automate. Blockchain-based streaming platforms and rights management tools have, thus, started popping up everywhere, and a lot of them are surprisingly usable.

If you’re primarily a listener rather than a creator of music, this is probably the first thing that comes to your mind when you think “blockchain music.” Chances are you turn to Spotify or Soundcloud for most of your daily listening, but services like Audius, Bitsong, Ujo, Musicoin, Resonate, and eMusic have all either launched functional blockchain-powered streaming platforms or are working on them.

While they vary in execution and music selection, they all have the same core premise: managing song rights with blockchains and paying artists with smart contracts gives artists a lot more revenue from and control over their work. You might not find the latest Taylor Swift album on most of them, but there are many independent artists of all levels who are flocking to these platforms. Audius, for example, has backing from Deadmau5 and 3Lau, who like its strategy of hosting music on decentralized nodes and its hands-off policy toward copyright management and takedowns.

Most of these platforms don’t charge artists to join, and many use their blockchain base in some creative ways, like artist tips, pay-per-play systems, and even ad revenues distributed to both the artist and the listener. Most of these apps are still in their early stages, but they’re quickly growing into platforms that average listeners can use to more directly support artists they enjoy.

For artists: rights management and distribution

In the old days, if you wanted to make it big in music, you had to sign with a record label – there was just no other way that your recordings could reach hundreds of thousands of ears. The Internet has changed that: anyone can make music, distribute it, and gain a following.

That brings its own set of challenges, though: artists have to manage their music across many different platforms (which they often have to pay to access), handle copyright issues, make sure their work’s metadata is correct, and more. That’s a big reason why record labels and middlemen still exist, but blockchains are really good at performing these middleman functions at a fraction of the cost of an actual middleman. That’s what projects like Creative Passport/Mycelia, MediaChain, the Open Music Initiative, Bitfury Surround, Buma Stemra, Blokur, and Digimarc, are doing.

Imogen Heap’s Creative Passport/Mycelia project was big news when it started up in 2015, and it’s still going strong. It works by keeping records of an artist’s work on a blockchain, which can, in turn, be connected to various distribution systems and used by anyone looking to license their music.

Basically, Creative Passport wants to give artists a way to prove ownership of their work, easily create and maintain direct business relationships, and perhaps most importantly, get paid accurately and on time when their music is used.

Setting up a smart contract between an artist and a streaming service (or marketing agency, movie studio, etc.) that automatically sends payments every time the song is used sounds complicated, but it’s actually simpler than the current system.

MediaChain is a lot more focused in its efforts, mostly working on a way to ensure that things can be accurately attributed to their creators and owners. For music, that would mean storing ownership and rights data on a decentralized blockchain alongside identifying data about the work itself, enabling anyone to figure out who needs to get paid or credited for a piece of music.

Spotify, which has had to pay large fines in the past for failing to correctly license its music, quickly saw the potential benefits of having a global, up-to-date song rights database. They bought MediaChain in 2017 in an effort to avoid future fines (and, incidentally, make sure artists actually get paid).

Streaming and rights management are two of the hottest areas right now, but they’re not the only ways people are trying to use blockchains to disrupt the music industry. Companies like Viberate are building blockchain marketplaces for events and booking, essentially decentralizing the concert-organizing business model. Even musical ICOs (Initial Coin Offerings) might eventually become a normal way for artists to finance their next album.

It’ll probably be a while before we start paying for our streaming subscription with Ethereum, but the music industry has been dysfunctional for quite some time and blockchains could help fix a lot of the issues for creators and audiences alike.